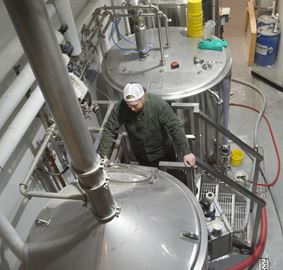 NIAGARA-ON-THE-LAKE — They say good things come to those who wait and Robin Ridesic is hoping her patience will pay off.

As the founder and CEO of The Exchange Brewery, she admits it’s been a long road to get from the brewery’s conceptual stage to this Friday, the day when the brewery will open its doors to the public for the first time.

“It’s been a lot of work. It took a while, but the day is almost here and we’re excited,” she said.

Set up in a heritage designated storefront on Queen Street, Ridesic said there were some bumps along the way to opening the 10-barrel brewery with tasting room and artisanal beer store. They had to get the property rezoned to allow it to become a brewery, had five variances, added an addition and dug out the basement to house the fermenters, barrels and cold storage. That would have been enough to deal with on its own, but there were problems through the construction process which delayed the project by two months.

“But everything has come together beautifully and the space is fabulous,” she said.

While the space at 7 Queen St. — most recently used as a store but was once home to the telephone exchange building — is small, Ridesic said they’ve taken advantage of every square inch. The site includes five 20-barrel fermenters, three brite tanks, eight 1,000-litre serving tanks, two 1,100-litre large oak barrels and 32 used wine barrels from Pearl Morissette winery used through the brewing process.

The tasting room has a 100-person capacity and Ridesic said they plan on hosting a number of events, including a grand opening sometime in February as well as an Oscar party. The retail store will sell beer to go in 750 mL bottles or growlers as well as The Exchange-branded merchandise. The site includes two bars, with eight taps each. Although, when it opens this weekend there will be six beers available: #2 Amber, #3 Porter, #7 IPA, * Session Saison, # Witbier and special release White IPA on tap.

The beer names and symbols make reference to the building’s telephone exchange history. Ridesic said she has a local artist making wooden tasting flight boards that resemble rotary phone dials, also a nod to the site’s history. The plan, she said, is to specialize in niche styles of beer, like sour beer, barrel-aged beer and hoppy IPAs.

“I wanted us to make the kind of beers that I like that weren’t being made here, at least not yet,” said Ridesic, an avid homebrewer.

To accomplish her goal, she brought in Sam Maxbauer, an American brewer with ample experience in  those types of niche beers. The plan, she said, is to experiment with local fruits, fruit yeast and barrels to produce 30 different beers in their first-year lineup.

“We like to think of ourselves as beer educators as much as beermakers,” she said, adding the front of house staff will be extremely knowledgeable in the brewing process. In the upstairs lounge area, there will be iPads with tasting notes so those not sitting near a bartender can still hear about the product. The entire facility is licensed, so guests can sip on their bevvies while going for a tour of the brewery.

Referring to Niagara College as a great resource, Ridesic said they’ve hired a large number of grads, from both the brewing and wine programs, to work at The Exchange opens Friday at 11 a.m., just in time for this weekend’s Icewine festival celebrations. Ridesic said they’ll have a signature festival drink, the #Witbier with an Icewine dosage, to mark the occasion. Moving forward, the brewery will be open daily starting at 11 a.m.