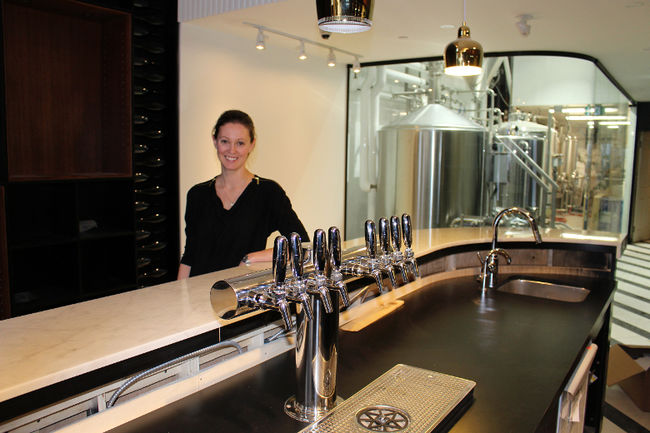 From the Queen Street sidewalk, it seems like a tiny space for a brewery.

But inside, the space has been designed to feel spacious, bright, and make the most of every square inch.

The Exchange Brewery, in the works for more than two years, will open on Queen Street in Niagara-on-the-Lake this week just in time to join in with icewine festivities.

So what would be more natural than offering a signature festival drink, an icewine beer cocktail that combines a robust porter with a dash of cabernet franc icewine – it’s quite delicious, says owner Robin Ridesic, with just a touch of sweetness to the brew.

The brewery is in a heritage building, built in the 1880s, and was once the site of Niagara’s first telephone exchange – hence the name.

The original part of the building was restored, an addition built on the back and a basement dug, taking the space from 1,400 square feet to about 3,500 square feet.

Although there were many hurdles to overcome that delayed the intended opening, including rezoning, heritage considerations, five variances and archaeological test digs, says Ridesic, “everything has come together beautifully. We’ve had some challenges, but we overcame them. We had to go through a lot of steps, but the town has been supportive and helpful throughout.”

The storefront itself is small, but with the addition and the basement, there’s a tasting room and artisanal beer store, with 30 different beers expected in the first year, six for the opening.

A beer-drinker and beer-maker at home, Ridesic lived in the U.S. for a while, where she learned there were interesting beers she liked that were not available at home. When she realized how much she was enjoying them, she decided she would like to turn a passion and hobby of hers into a business, and introduce some of her favourites, especially the sour beers and the hoppy IPAs, to Ontario.

And where better to open a brewery than NOTL, which was seeing the start of a growing craft beer industry. She chose Queen Street for its foot traffic, and went looking for a location, which she found, right next door to the Apothecary. Her brewmaster, Sam Maxbauer, was convinced to move from Michigan, and bring his extensive knowledge and experience of barrel-brewing with him.

There are two bars with eight taps each, one on the main floor for tasting, and another upstairs, which will have lots of room seating.

Collin Goodine, who has worked as chef at the Pillar and Post, the Oban Inn and Riverbend Inn, now runs a catering company, and will be providing five “small-plate items,” snack or appetizer-type choices to enjoy over a beer.

The basement area, where beer travels directly from the large serving tanks to the taps – will also be open to the public for small tours.

In addition to the icewine beer cocktail, the brewery is opening with an amber ale, a robust porter, a session saison – a low-alcohol introduction to a Belgian-style beer, a west-coat IPA, a Witbier and special release White IPA, Belgian-style, on tap.

The brewery is employing Niagara College graduates and students – five from the brewing program and two from the wine program, says Ridesic.

“It’s really handy to have the college close by.”

The Exchange Brewery will be open Friday morning, when Queen Street will be closed to traffic, with the Icewine Festival underway.